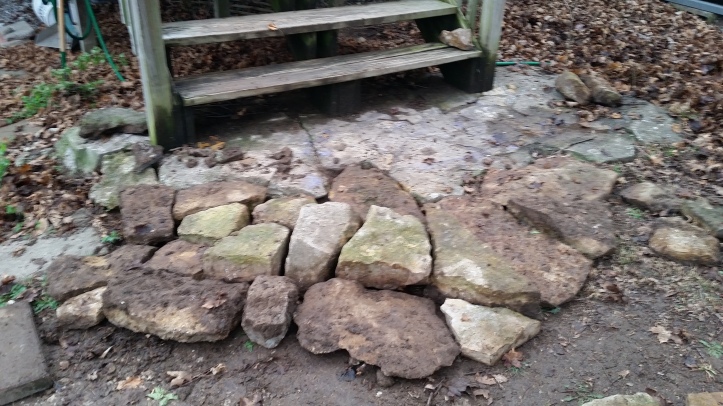 One year, my Mom spent a whole lot of time moving rocks around. I watched her move and look, dig and place, dig some more and eventually put each rock into place. It took her hours and hours of time staring at the ground, digging with a long shovel and a hand shovel, and talking to worms that she had unearthed.

After saying, “I’m sorry, worms,” many times over, Mom looked up at me on the deck and said, “Till Will, this is worm killing, and I HATE it! We have GOT to get this walkway done before our entire population of worms is decimated!” I agreed, and from the deck, continued to watch and send her energy so that she didn’t chop up any more worms while getting those rocks placed. Mom didn’t like to be the hand that hurt things, even worms.

For many, many days, Mom spent every spare minute in the cool spring air forming these rocks into the earth. After a few days, I knew what it was going to be – a Dog Highway into the yard! To keep us from getting Muddy Paws!! 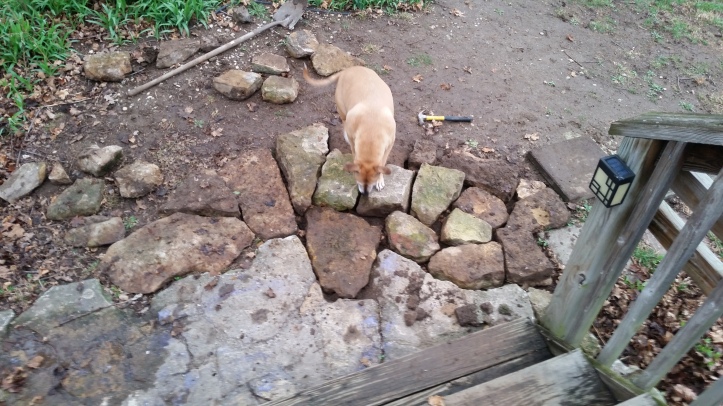 After placing the rocks at the bottom of the steps, Mom extended them out beyond the shade tree, even beyond the deck itself. She connected it to an old sidewalk that was already in our backyard, probably from another house that had once stood on the back of our acre. She talked to us three dogs and gave us the play-by-play on what she was doing, and we had long, deep philosophical conversations during the laying of the Dog Highway. It helped to pass the time for us while we waited for Mom. 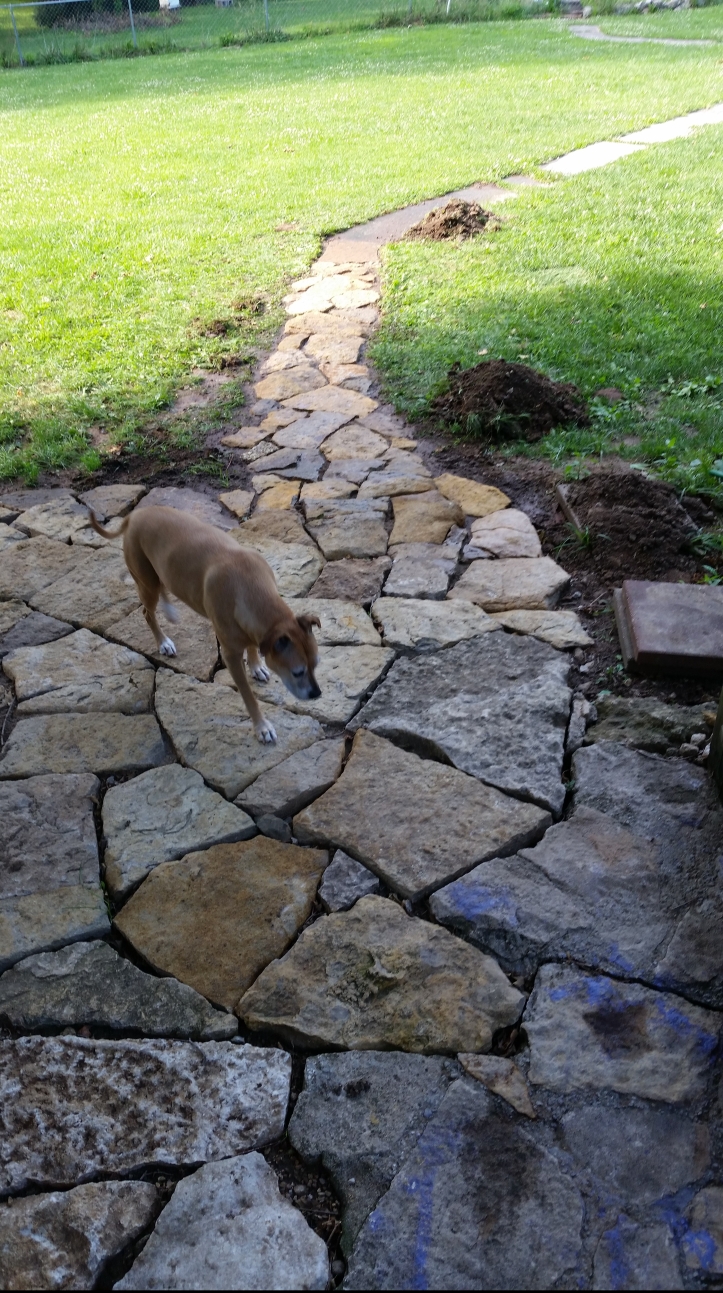 One day Mom was unusually quiet, and from my vantage point on the deck, she seemed to be way out in the yard, far away from me. Pretty soon she exclaimed, “Our Dog Highway is complete!!” She seemed very happy about it, and called me over to walk on it, so I did! I marched, marched, marched all the way down and back up. Mom and I like to celebrate jobs that are arduous and well done (usually with a cookie.) We both walked up and down the Dog Highway a few times to celebrate. The other two dogs followed us, and we four made a parade marching up and down our beautiful new path. 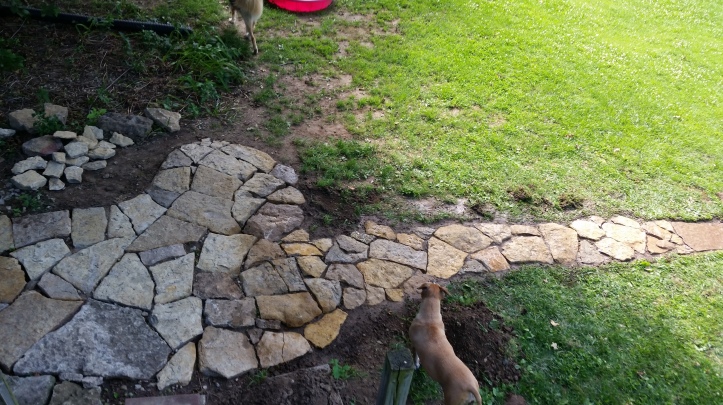 Then Mom said, “If you come up here and look down at the Dog Highway from the deck, he looks like a man, pointing north. And, since David Bowie just passed away, I’m calling him Starman, and he’s pointing at the North Node, the node of destiny.”

I don’t know who David Bowie I, or what is significant about a destiny, but I know it touched my Mom’s heart that she dedicated our highway to something greater than all of us. As if David Bowie had sent his blessing to our Dog Highway. For a minute, her mind and soul floated off into the universe trying to find David Bowie, then she played some music from her phone and sang at the top of her lungs, “There’s a starman waiting in the sky. He’d like to come and meet us, but he thinks he’d blow our minds. There’s a starman waiting in the sky. He’s told us not to blow it cause he knows it’s all worthwhile.”

One reason I’m remembering this story is because right now I’m watching Toby walk the Dog Highway as he makes his way up to the deck. After these many moons, no matter where Toby is in the yard, when it’s time to come in, he insists on catching the Dog Highway to walk to the deck.

Toby was the first of my roommates, and was not tame when he came to our house. I taught him most everything practical he knows (because when it comes to intuition, he’s already a genius). After lots of years with us, he’s still so timid and I don’t think that will ever change for him, even though Mom tries to get him to ride in the car (he hates it), meet new people (Toby says they are OK ONLY IF accompanied by a dog), and walk on a leash (Nope, he is NOT interested. He won’t even leave our yard! He sits and won’t move.).

The Dog Highway is Toby’s primary path, his guide, his security, to take when he comes up into the house. I sometimes think Toby is still celebrating the Dog Highway with his own parade because he loves Mom so. But he also thinks it was very smart of Mom and oh-so-special that she made us a permanent path of stone to walk upon to keep our paws clean!